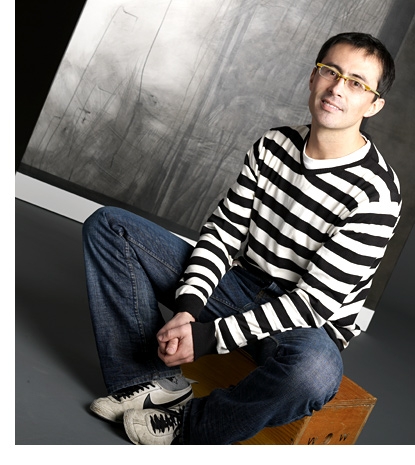 For someone who paints almost exclusively in black and white, Fernando Ortiz has a warmth and exuberance for life that is anything but colourless. The Colombian painter grew up in the capital city of Bogotá, loving soccer and playing another form of it called micro football, which is played with a harder ball that doesn’t bounce. This seems typical of Fernando, to find a way to challenge himself beyond the expected, and enjoy every minute of it. Although he loves his country and even enjoyed going to university (“I didn’t want to leave!”), he soon joined older brothers in the United States, and subsequently Canada.

While Fernando has the “typical artist” laidback vibe and doesn't seem to be frazzled by life’s ups and downs, he is far from the messy, brooding painter cliché often depicted by most mainstream movies. In an immaculate and sparsely decorated studio apartment, Fernando says he finds furniture gets in the way of human interaction and does not like disorder. He also tries to avoid analyzing why he paints almost exclusively in black and white, but when pressed, speculates that he views colour as complicating things.

This doesn’t have to be negative, though, as he explains that life being complicated is what makes it beautiful. “The structure is in the details – whether it is a city, a person, or a painting”. His outlook on life is positive and genuinely seems to take the best out of every experience, viewing negative aspects of life as quirks, rather than fuel for anger. In fact, Fernando says you can’t really explain painting, but what he can reveal is that he can’t paint when he is in a bad mood. He finds it easiest after a soccer game when he is filled with energy, or after something wonderful has happened in his life.

Similar to his paintings, Fernando is open and closed at once. There are sparks and moments of uninterrupted chatter and then calm, reticent musings. Letting moments arrive to him is part of his method of painting as well. He describes his process as starting out with a black canvas and slowly erasing parts. “This is the humble way to paint, to be open, and let it come out as it wishes”.

He prefers geometrical shapes and abstract images, opposed to concrete forms and directly trying to elicit a certain contrived emotional reaction. Laughingly referring to them as painted Rorschach tests, he prefers not to analyze his work and leave it open to interpretation. He works with as much free will as he can summon, and ideas will pop into his head anywhere, even just to draw cartoons of people he sees on the subway.

The contradictions continue when we get down to the basics. Avoiding direct questions about his paintings, he prefers to discuss the things that inspire him to create. His pleasures are simple; one of the most surprising is a love of driving! He swears that a great evening for him can be as simple as a night drive, some pizza, and a Sprite. I laugh at this unexpected combination, and he smiles, defending it, “No, I really do!” He also enjoys writing in journals, especially after he feels moved by favourite writer Jorge Luis Borges.

The pursuit of happiness through simple means is not always easy, and he does admit frustration with certain aspects of the artistic sphere. “With art, you are expected to produce novelty all the time. But for me, being truthful to myself is more important than making some breakthrough”. He doesn’t like to do custom works, explaining that he can’t make everything turn out the way he wishes. “Every piece has its own life. And some are so bad from the beginning I have burned them! Really! It just never wanted to exist, so I can’t force it”.

He also says he doesn’t like computers and feels disconnected from this technological evolution of society, and he doesn’t like the idea of art being absorbed by it. “I feel it is hard now for a painter. Now more than before, hands are undervalued. Painting is about living, the physical experience of using your hands. That is real, a real experience. You can travel into yourself, and sometimes the landscapes in you are not pretty, but there are always high peaks there, and you surprise yourself”.

Not interested in making predictions for the future, Fernando seems willing to take whatever life offers him, whether it’s what he wants or not. “No matter where you go, to the highest or lowest, it’s okay. You need balance in life”.

For now, Fernando seems content working in his studio and enjoying life day by day. He somehow preserves this seemingly endless curiosity in the details of life and is able to absorb them fully. His work is a byproduct of this intriguing and inviting view of life, beautifully abstract and emotional images, springing from canvas that leave a feeling of mystery, much like Fernando himself.