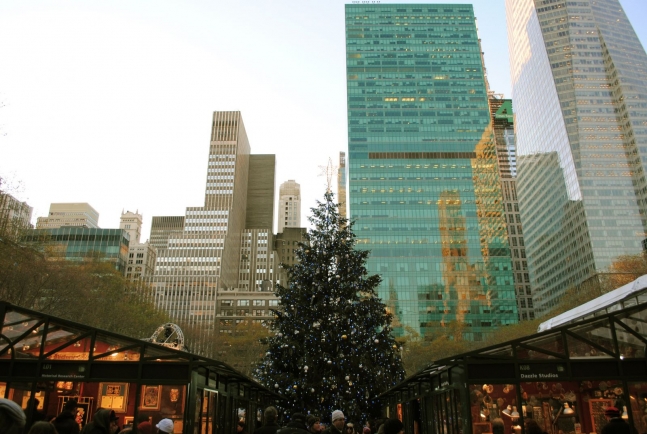 Well, perhaps that second point is up for debate to some, but for me, it’s the best. There is definitely a special place in my heart reserved for New York City.

I’m from New Jersey, born and bred only a couple of hours away from the Big Apple. I grew up anticipating day trips to New York- the view of the magnificent skyline across the Hudson River as we approached on the Northbound Interstate; my first glimpse of the Statue of Liberty, tiny in the distance; the long, dark confines of the Holland Tunnel, tail lights in every direction—and then, popping out the other side in the middle of TriBeCa and SoHo, instantly surrounded by the city. The people, the taxis, the height of the buildings, the noise in the streets. Bryant Park during the holidays, pictured above. 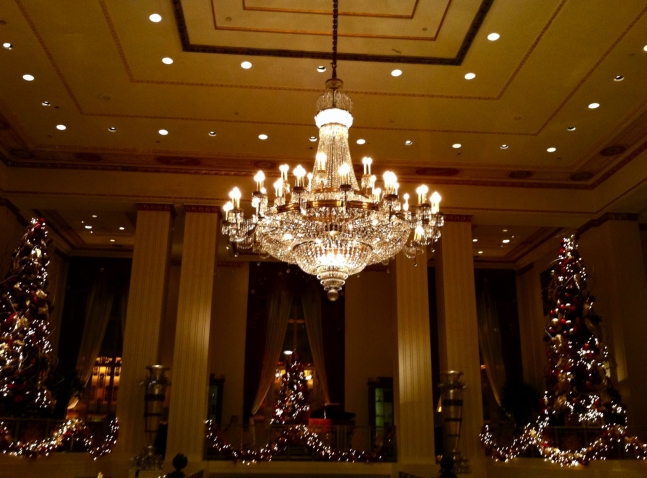 Don’t get me wrong; the country can be beautiful, peaceful, natural, and safe. But there is something about the energy of a city, especially New York City, that just makes you feel alive.

After years of visiting mainstay New York destinations like Fifth Ave., Times Square, and Rockefeller Plaza with family, I finally got to experience staying in the city on my own. Well, with my boyfriend. It was a six-day, five-night whirlwind, beginning with check-in at the Waldorf=Astoria on Park Avenue (lobby pictured on left) and concluding in a visit to Central Park on our last afternoon in the city. All with non-stop activity in between.

There is so much to see in New York City, especially at this time of year. Storefronts are decorated with extravagant displays, like the Saks window display pictured below. I was amazed by the mechanical, intricate displays in windows like Bergdorf’s and the Lego store in the Theatre District, too. 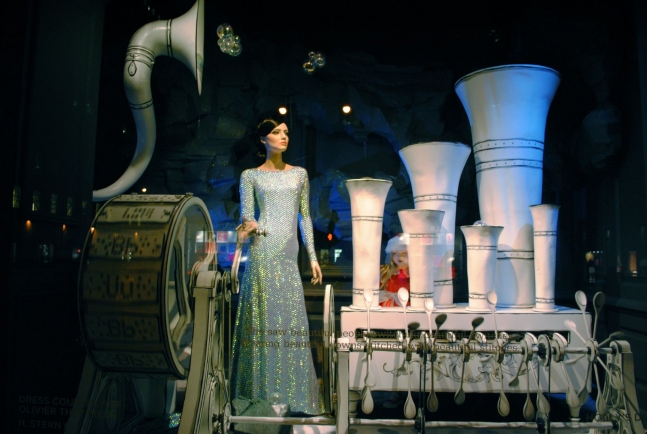 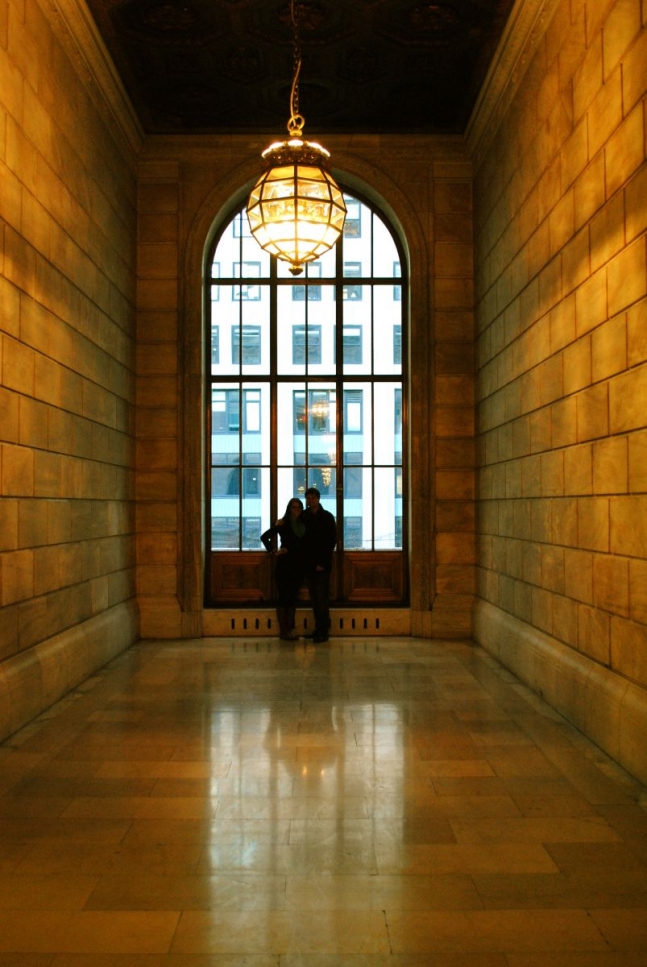 My aunt, uncle, and cousins came up to visit for a day. The kids are 9 and 11, but they trooped through that city like champions, marveling at the decor in the streets, jumping on the subway like pros, and keeping up at crosswalks. So don’t necessarily let having young children deter you from taking a trip there if you really want to go.

After an adventure navigating the subways in search of the perfect NYC lunch, we refreshed ourselves with caffeine (on a side note, it does not seem pleasant to work at a city Starbucks during the holidays. Poor things).

Next, we headed to the largest public library in North America, the New York Public Library, where there is a currently a display "Celebrating 100 Years," which contains library treasures.

The photo to the right is a shot of my boyfriend and me in one of the original halls of the library, which was established in 1902.

Oh, another side note - I love random bits of history. 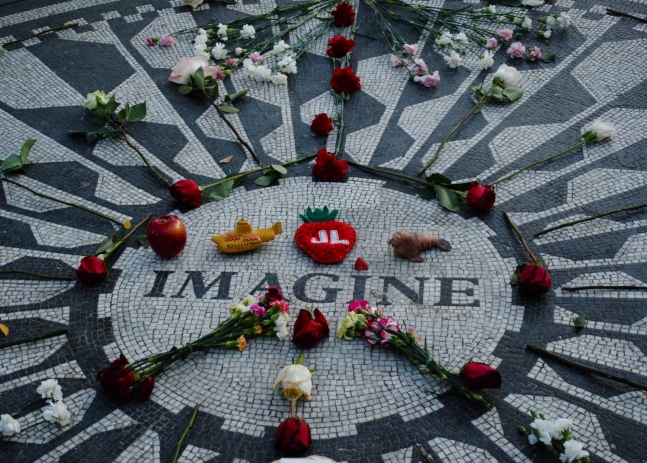 Exploring Central Park was another aspect of New York City that I wanted to spend a little more time on during this trip.

We wandered deep into the Park and saw the Belvedere Castle, Strawberry Fields (the John Lennon tribute located at Central Park West near the apartment Lennon lived in before his tragic death), the Turtle Pond, and many other sights and sounds.

Despite claims that NYC is a concrete jungle, there was bountiful, beautiful greenery all around us in Central Park, as evidenced below. In fact, there were a lot of little bits of nature sprinkled throughout the areas of the city that we visited. 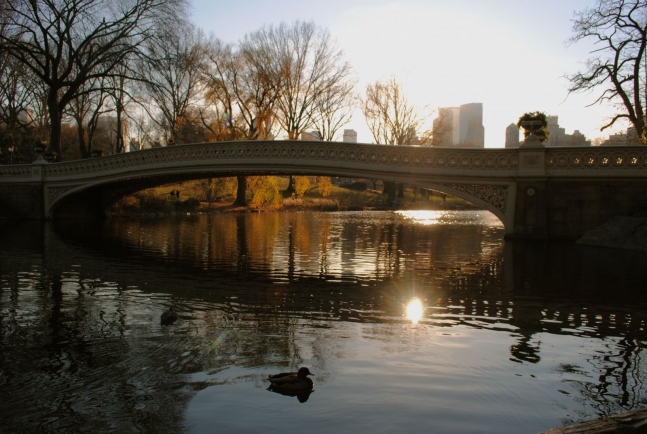 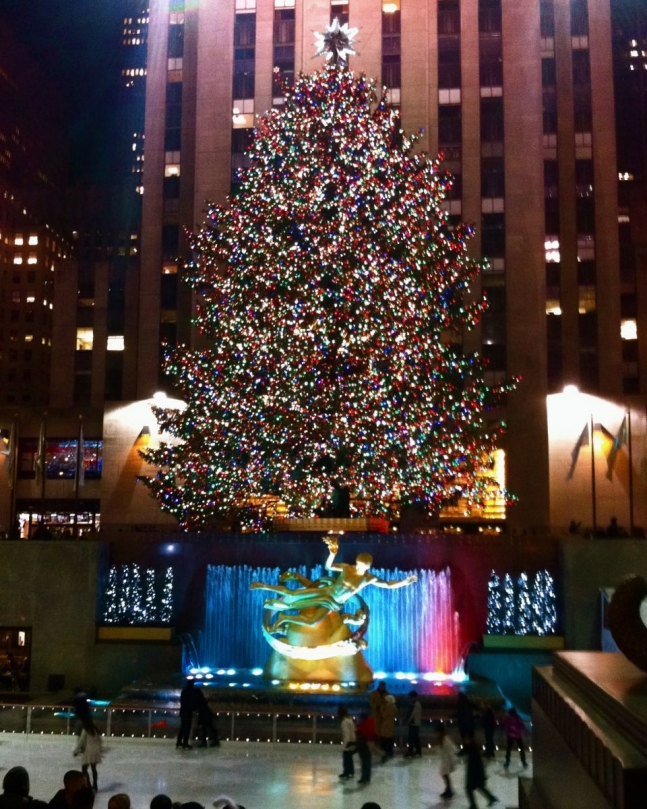 And of course, no trip to the city is complete without stopping by to see the massive Christmas tree at Rockefeller Plaza, where it stood twinkling high above the crowded ice skating rink. This year, the tree was as big and as crowded as ever before.

We actually headed over around midnight one night to get an unencumbered view. Walking through a very safe section of New York so late at night, with fake snow etched into the corner of every window and white lights shining in the trees around us, made it feel like a true winter wonderland.

In the Air There’s a Feeling of Christmas

New York is a magical place to visit at this time of year, no matter where you are from. The diversity of an afternoon walking from the Brooklyn Bridge to the Financial District, where we saw the base of the new Freedom Tower, over to TriBeCa and then into Chinatown and Little Italy, felt like the combined efforts of all the other cities I’ve been to, wrapped up into one. 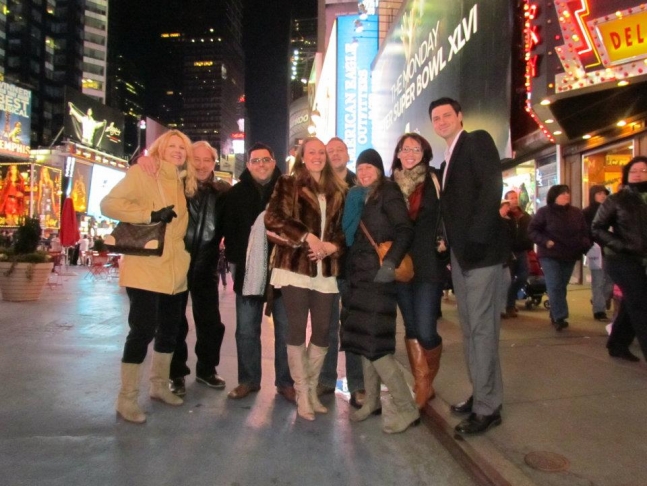 Of course, it felt more like Christmas in the commercial midtown arena of shopping and subway destinations, but the overall excitement of being in the city for the holidays was apparent everywhere.

I hope to go back soon, and my pipe dream is to go back to stay! In the meantime, holiday visits like this will have to suffice.

If you have not been to NYC at this time of year, I encourage a visit. Sightseeing, countless museums, plays on Broadway, the Empire State Building, and the Rockette’s “Christmas Spectacular” are just a few more of the reasons to go, especially in December. Oh, and the food. We ate everywhere from a Giants-loving sports bar to a fancy hotel restaurant to a hot dog cart in Battery Park to a NY style pizza counter.

To part, here is a family snapshot from Times Square. Enjoy the Photo Journal as much as I hope you enjoyed the holidays! 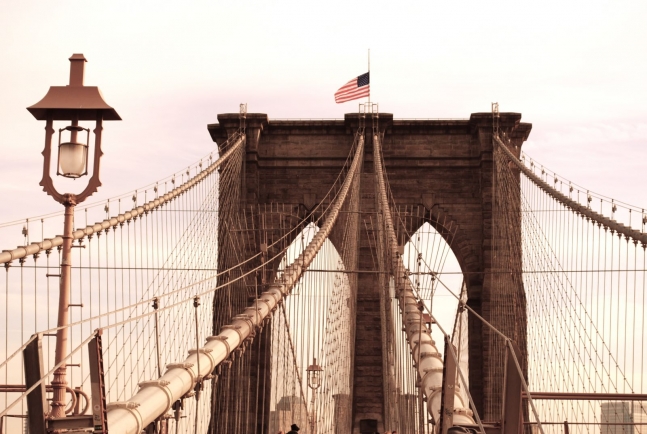 Have you been to New York during the holidays? Where have you traveled during this Christmas season?

Share your travel experience in the comments section below!

From the Brooklyn Bridge down here to Tampa, Fl, and beyond, I wish you a Merry Christmas and a Happy New Year!