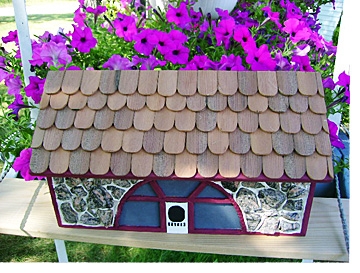 John Bath and his wife Carol decided to settle in Wasaga Beach, Ontario, after he lost his job in Toronto. Wasaga Beach is a popular tourist destination with white sandy beach and hiking trails, seemed like a perfect place to retire.

John started making mailboxes after his wife told him one day that his next door neighbour was making a mailbox. She asked him if he could make one for their home.

John said that he would try, but he didn’t want to make just a box with a lid. He had a better idea. He decided to make his mailbox, so it would look like a little house.

This conversation happened about 16 years ago. Since that time John's unique mailboxes were featured on Global TV and in "Our Canada" magazine and Toronto Star newspaper.

Soon after his TV interview was aired, his phone started ringing with people wanting to order his mailboxes and asking John if he could make mailboxes that looked like Lighthouses and Train Stations.

Today John is still making his mailboxes, and no two are the same. If you'd like to buy one or to place a custom order, please visit John's iCraft store.